Los Angeles 14th District City Councilmember Jose Huizar shifted $300,000 in public funds to Night on Broadway five days before federal agents raided his office and one month before he canceled this year’s edition of the annual event.

Night on Broadway reportedly peddled sponsorships and vendor spaces and drew 250,000 revelers to Downtown Los Angeles in its most recent run in January 2018.

Huizar recently committed to providing records related to the finances of Night on Broadway to SullivanSaysSoCal.com, a move that followed 10 months of his delays on a request made under the auspices of the California Public Records Act.

The information is expected to be made available in the near future, although there’s no telling as of this writing if Huizar’s office will carry through on the commitment or how much information might be held back under the discretion that the state law gives public officials.

SullivanSaySoCal’s search for information on Night on Broadway goes beyond requests to Huizar’s office in any case. Ongoing reporting recently yielded a contribution from Ryan Thompson, a self-described “concerned citizen” from outside the 14th District.

Thompson sent along information from a Los Angeles City Council file that documents Huizar’s request for the reallocation of $300,000 from the budget for tree trimming in the 14th District to Night on Broadway. The file shows that the City Council approved the request on November 2, 2018, and indicates Mayor Eric Garcetti approved the move.

It’s uncertain whether the status of the $300,000 will be addressed in the documents from Huizar’s office.

The documentation of the reallocation of funds came to SullivanSaysSoCal after it submitted a general request for financial data on Night on Broadway’s operations. A separate and specific request about the status of the reallocated $300,000 was submitted to Huizar’s office yesterday, and there has not been a response so far.

The timing on transfer of the funds and the subsequent stonewalling on requests for information on the finances of Night on Broadway beg questions, especially in light of the larger federal investigation of Huizar and others at City Hall.

Here’s a timeline to consider:

October 30, 2018: The request to transfer the $300,000 to Night on Broadway came in a report from the City Council’s Budget and Finance Committee.

November 2, 2018: The full City Council approved the request by a 12-0 vote, with three members recorded as absent.

November 7, 2018: Agents of the FBI and IRS raided Huizar’s office in City Hall and another field office, along with his home in Boyle Heights.

December 2, 2018: Huizar’s office announced that the 2019 Night on Broadway – which had been scheduled for January of this year – would be canceled.

So what happened to the $300,000 once Night on Broadway was canceled?

Recent experience dealing with public records in LA indicates this might take a couple of weeks to sort out.

It’s been nearly a year since SullivanSaysSoCal.com launched, and I want to take a moment to thank the hundreds of subscribers who have so far joined the Smartest Conversation in Town – and remind them to tell a friend so I can thank thousands more next year.

I also want to thank the vibrant roster of advertisers who have signed on so far.

Now for an update on plans going forward, which will include some change-ups here and there. Look for some columns to feature strings of briefer items, and others to focus entirely on one subject.

The changes will reflect feedback I’ve received over the past year, and I hope such communications continue.

It’s clear that subscribers genuinely appreciate SullivanSaysSoCal’s thoughtful and thorough coverage, which has earned a reputation for providing a valuable piece of intellectual backbone to the region’s mix of media.

Rest assured that will continue amid continuous efforts to improve, with a constant goal of delivering the column in a format that best serves our readers.

Kudos to Anton Segerstrom, Debra Gunn Downing and the rest of South Coast Plaza crew that worked on The Fall Edit: A Men’s Style Event last week, when cocktails tended toward the classic, fashions trended young, and a good time was had by all atop one of the toney retail mecca’s parking structures.

The October 15 event had lots going for it besides the latest styles from Ermenegildo Zegna, Stella McCartney and other labels.

Celebrity chef Amar Santana shucked oysters and personally made sure there were plenty of lemon and lime wedges at the seafood bar he set up as a preview for his soon-to-open Hall Global Eatery.

Forever-young Segerstrom kin and playboy emeritus Richard Moriarty made the scene in a jacket fit for a lavish Broadway musical.

A classic OC sunset provided a glowing backdrop for it all.

Yet a big-screen version of Pac-Man might have been the clincher for Gen Xers and Millennials who combined to account for what looked to be more than half the crowd – a significant note from the upper reaches of the socio-economic scale in OC. 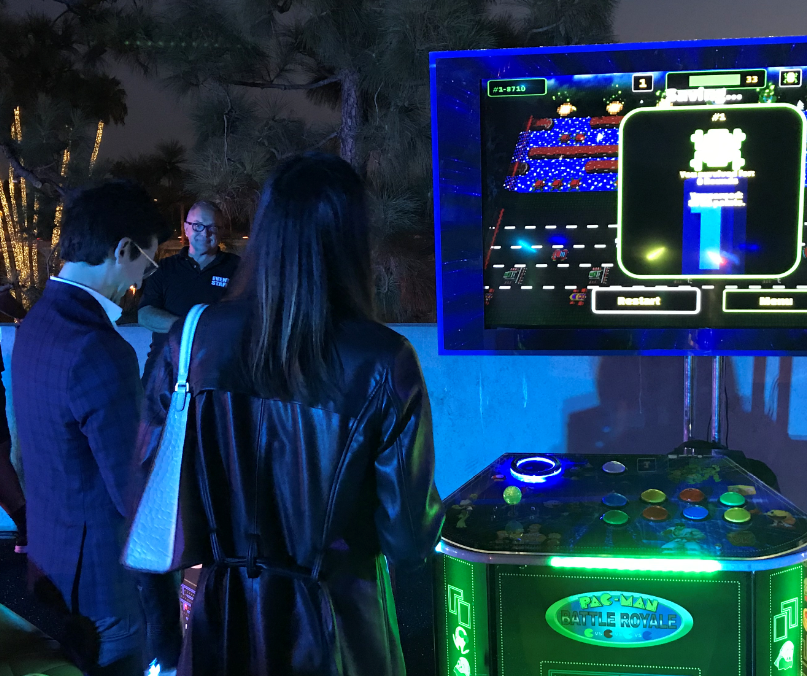 No shortage of trend setters on the high end in OC, birthplace of everything from surfwear to Gwen Stefani.

Add a recent string of guilty pleas in the college admissions scandal as the latest trend, with a backhanded credit to Doug Hodge, a former CEO of Newport Beach-based financial giant Pimco and current resident of Laguna Beach.

Hodge had appeared to be dug in to defend against charges that he conspired to secure spots at USC for two of his children with a bribe passed through Newport Beach-based scamster Rick Singer.

Then all of a sudden he wasn’t.

And now it looks as though another OCer – Michelle Janavs, a scion of the Hot Pockets fortune – followed suit by switching from a not-guilty to guilty plea.

Some free advice to one-time sitcom star and fellow defendant Lori Loughlin: Consider Hodge the canary in a coal mine – if anyone had the resources to beat the rap it was him.

Cop a plea and cut your losses.

Loughlin has an OC tie, thanks to her husband, former fashion star Massimo Giannulli, who founded his once-hot eponymous label in Newport Beach as a quintessential OC beach brand.

Then he crashed the business, and the label made its way into the portfolio of a visionary LA merchant named Bobby Margolis, whose Van Nuys-based Cherokee Inc. revived it as a cheap-chic hit through a deal with discount retailer Target.

The impeachment drama playing out in Washington includes some inside baseball that illustrates how the Pacific Council on International Policy can be an extraordinarily valuable asset to members and others who engage with the Downtown LA-based nonprofit.

Let’s set the scene by noting the Pacific Council is globally focused, with an emphasis on the pragmatic over political ideology and partisan politics. Its membership includes plenty of Democrats and Republicans – and they tend to check their blue and red cards at the door when it comes to Pacific Council business.

That was the case during a breakfast briefing the organization hosted on March 29, long before President Donald Trump’s dealing with Ukraine created some sparks to go with long-smoldering talk of impeachment. The guest was Gordon Sondland, who serves as Trump’s ambassador to the European Union. He understood that about half the crowd would be skeptical of him based on his boss.

Sondland plowed ahead, leavening his remarks with reason and spicing them with candor couched in diplomatic terms.

He also addressed the differences between career diplomats and the sort of political appointment that took him from life as a boutique hotelier and big-ticket campaign donor to a key role in U.S. foreign policy.

Sondland’s performance impressed across the board, and his well-chosen words created some common ground on foreign affairs. That much was confirmed by a chat I had immediately after the briefing with a Pacific Council member who also happens to be influential at the highest levels of the Democratic Party.

No, the talk didn’t turn this fellow into a fan of Trump or have him reconsidering his party affiliation. But he did volunteer that Sondland’s ideas, words and demeanor made him feel better. He said he took it altogether as proof that the Trump administration did include some smart people who bring goodwill and circumspection to their duties.

Now Sondland seems to have broken with his boss by testifying in front of U.S. House of Representatives impeachment investigators over the goings-on in Ukraine. That makes it no exaggeration to say that the folks who got up early and trekked to the Montage for that Pacific Council breakfast briefing back in March are more equipped to understand the ramifications of that development than most of the world.

That doesn’t mean any of them are necessarily feeling better, but some extra degree of understanding can help – especially these days, when so many things have grown difficult to comprehend. 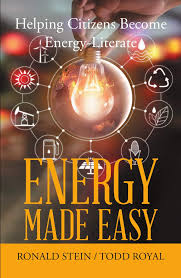 Put Todd Royal down as co-author.

Give Royal and Stein both credit for a subtitle – “Helping Citizens Become Energy-Literate” – that gets more compelling with every gust of Santa Ana winds, power outage and wild fire regardless of where you stand on going green.

Head west on Wilshire Boulevard and turn right on Beverly Drive if you want to see an under-rated star of the SoCal food scene and true champion of Mexican food.

Go to 252 North Beverly Drive and you’ll find the latest from Frimex Hospitality Group and its founder Vicente Del Rio, who has gone from operating taco stands in Mexico City to put himself through college to a white-tablecloth place in the world-renowned Golden Triangle of Beverly Hills.

It’s called Cantina Frida, and it serves up the multi-dimensional nature of Mexican cuisine in high style.

How far has Del Rio come from those taco stands in Mexico City?

His Cantina Frida recently took over the space previously occupied by Fleming’s Prime Steakhouse. That’s just part of the appeal of the place, which merits special mention for its gobernadora taco, not to mention the tres leches cake for dessert.

Del Rio himself merits mention for his steady progress as an entrepreneur, a path that started when he got his degree, became a CPA, and took a temporary assignment that carried him from Arthur Andersen’s office in Mexico City to LA.

The food sells the concepts, although it doesn’t hurt to have locations on a power corridor in Beverly Hills.

Perhaps that helped Del Rio draw interest from folks representing the mixed-use development that will surround Stan Kroenke’s SoFi Stadium in Inglewood. And get into talks with Rick Caruso’s company about a package of possibilities that would include a taco shop at Palisades Village and a full sit-down place at The Grove mall, along with retail centers in Westlake Village and Calabasas.

How about the Forum Shops at Caesars Palace in Las Vegas.

Del Rio says that could be where he plants Frimex’s flag outside SoCal for the first time.

That’s not fake news – but I am playing around a little bit.

The headline refers to Jim Fallon – not Jimmy Fallon.

And he’s a professor of neuroscience at UC-Irvine – not a late-night TV host.

Jim-not-Jimmy Fallon also wrote a book called “The Psychopath Inside,” which examines various factors that help shape human brains, using PET scans and genetics to uncover what it bills as some “deep, underlying traits that make people violent and murderous.”

Now that I’ve got your attention, I suggest a visit to the Newport Beach Marriott Hotel & Spa to check out Fallon’s keynote address at the Medical Technology Innovation Forum hosted by Aliso Viejo-based nonprofit convener and connector OCTANe on March 29.

The keynote is just a slice of a full day that will bring executives, investors and others together for a look at how medical technology continues to grow as a vital segment of SoCal’s economy with a solid base in OC.

It’s worth a visit and $9 to check out how Supernatural Sandwiches in the 4th Street Market in Downtown Santa Ana has set a new standard on the old standby of tuna fish with its “Poseidon.”