Take 93,000 acres of prime SoCal land … identify five personalities who were prime stewards, shapers and visionaries of how the land would be developed … set the action in Orange County as the post-World War II boom spilled over from LA—and you can see why a new book about the Irvine Ranch has a working title of “The Big Plan.”

It comes from Mike Stockstill, a one-time journalist and veteran communications pro for various public- and private-sector entities in OC. Stockstill teamed up with Pike Oliver, a real estate consultant-cum-university lecturer with Ivy League credentials to burnish his deep ties to California’s state government.

Both Oliver and Stockstill worked at various times for the Irvine Company, the developer of the Irvine Ranch, a chunk of Orange County that goes back to a Spanish land grant. The authors take pains to point out that the book is about the ranch and not the company.

That’s a crucial distinction that explains why a famous name—Donald Bren—is conspicuous in its absence in the lineup of key players the book considers. The omission owes to the timeline of the book, which is focused on a crucial time for the development of the Irvine Ranch, which spreads from Newport Coast to the Cleveland National Forest. The spread was “almost entirely in field crops and citrus in 1960, but a flood of urban development was at its borders,” the authors note.

The book starts there, with a narrative examination of the roles the five protagonists played in turning that flood into a flow of master planning that led to a research university and a city of more than a quarter-million residents, among other developments, on the ranchlands.

The narrative ends in 1977, essentially setting the stage for Bren’s arrival as the driving force of the Irvine Company and, by extension, the Irvine Ranch.

The book is due out later this year from the Routledge imprint, part of Taylor & Francis Group, a U.K.-based publisher of business and academic titles.

Here’s one to give you pause anytime you hear a colleague say, “That one’s going in my book”—a phrase the late, legendary Walt Disney Company chairman and Irvine Company leader Ray Watson often uttered.

Turns out Watson did work on a book based on his varied career—much to the benefit of Stockstill, Oliver and other researchers.

Watson got six chapters finished and left them to the UC-Irvine Libraries, along with several unfinished chapters. He also left an oral history to the Bancroft Library at UC-Berkeley.

Stockstill and Oliver might stand “cancel culture” on its head with some of their work. They promise that their research for The Big Plan unearthed information that will account for “the rehabilitation of the reputations of two key individuals who were unfairly maligned by previous histories of the Irvine Ranch.”

He and Irving Azoff run their Oak View Group from offices in Westwood.

Leiweke’s stint in charge of the Staples Center, LA Live and the LA Kings remains a bold-face highlight on his wide-ranging resume.

His latest highlight will come in New York, though—in Queens, to be more specific. That’s where sports developer and consultancy Oak View Group has brought the UBS Arena into existence as a new home for the New York Islanders hockey franchise.

The arena will see its first action this fall, and the team has already sold 15,000 season tickets, with 49 of 56 luxury boxes taken, at last report.

The season-ticket sales already amount to nearly 2,000 more fans than could fit in a sold-out Nassau Coliseum, which hosted the team for most of its first 49 years.

The UBS Arena will hold up to 17,500 fans, but Oak View Group designed it to retain some of the raucous atmosphere of the old stadium, which was famous throughout the National Hockey League for its close-in cacophony. Leiweke’s crew turned the trick by giving the new building a significantly bigger lower bowl—with 10,000 seats—while containing upper sections in a framework with a height of just 93 feet from ice to ceiling. That’s just three feet higher than the old joint—and closed-in enough to keep things plenty noisy.

The Staples Center, by comparison, is about 150 feet at its highest point.

The new arena in Queens also is being built specifically for hockey—no small thing for the Islanders, whose only prior sojourn away from Nassau Coliseum was a five-year stint playing at the Barclays Arena in Brooklyn, sharing the facility with the Nets basketball franchise.

Barclays proved to be a challenge, with inconsistent quality of the ice and scanty ticket sales—the season-ticket base in Brooklyn was about one-third of what the Islanders have already sold in the UBS Arena. Such troubles eventually prompted the Islanders to go back to Nassau County.

Now they’ll cross the county line again, and they’ve hit upon a sweet spot in Queens, according to Leiweke. He recently told the Wall Street Journal that the site of the new stadium next to the Belmont Park horse-racing course was a rare, large patch of dirt without rail lines and tunnels on or underfoot, which allowed the bigger footprint for the 10,000-seat lower bowl.

Congratulations to Arizona State University on the pending opening of its new satellite campus at the newly refurbished, ever-historic Herald Examiner building at 11th and Broadway in Downtown LA. 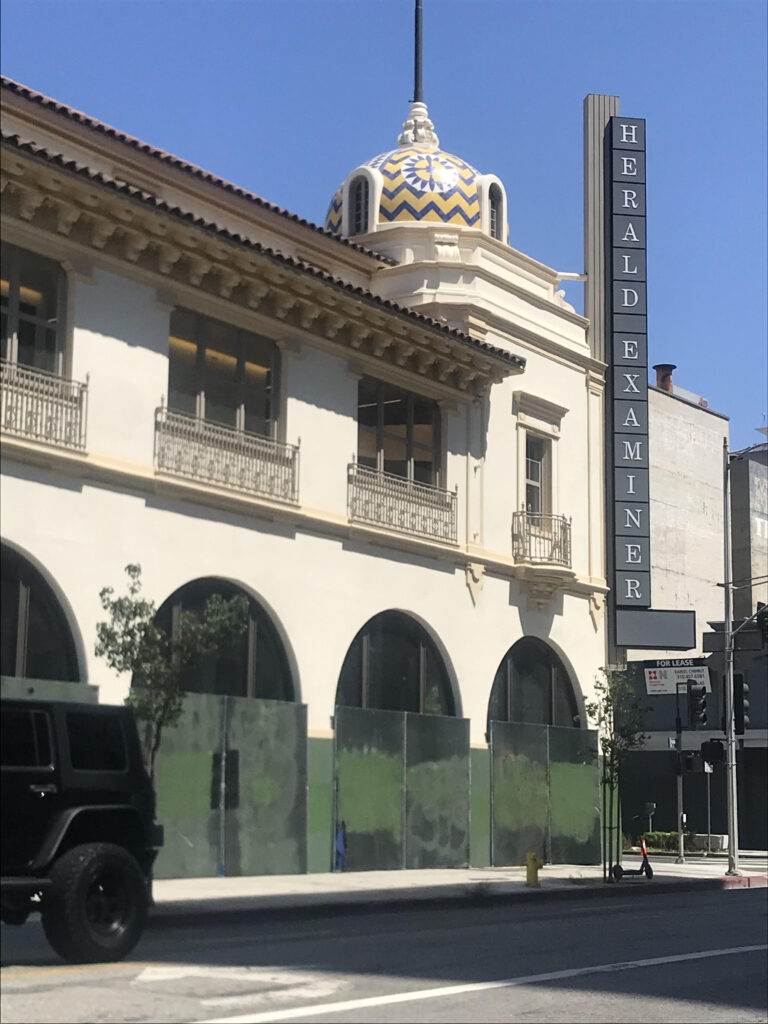 The center is expected to debut later this month, with programs of ASU’s Walter Cronkite School of Journalism and Herberger Institute for Design and the Arts taking up residence.

The Tempe-based school is a partner as well as the primary tenant in the building, which will also be home to the office of Dulce Vasquez, the director of strategic partnerships in ASU’s Office of University Affairs.

That’s the same Vasquez who is challenging Curren Price in next year’s election for his 9th District seat on the Los Angeles City Council, by the way.

The Herald Examiner building is a few blocks outside the boundary line of the 9th District, which includes a portion of DTLA near the Staples Center and a much larger swath of territory south of the 10 Freeway.

That could change when new district boundaries are drawn later this year, part of a once-every-10-years adjustment that’s supposed to be based on census data, among other factors.

But you’ll soon have to look east for Moira Shourie, executive director of the nonprofit. Shourie is headed to the Columbia School of Journalism in NYC for an upcoming term as one of 20 Sulzberger Executive Leadership Program Fellows. The cohort will spend about five months “focused on innovation and experiential learning to launch, accelerate and implement a strategic project that is central to the mission of their organization.”

Kudos to Shourie and to Kimi Yoshino, a managing editor of the LA Times, also named as a Sulzberger Fellow.

They don’t always recognize it, though.

The irony of hip can be spotted at the intersection of Glendale Boulevard and Montana Avenue in Echo Park—a bastion of gentrification.

A KFC has yielded to Starbucks on the northeast corner, and an old-school SoCal drive-thru “dairy” has been leveled into a parking lot to the northwest. The same goes for an old house that had been on the southeast corner. A storefront evangelical church that once filled the air with tambourine-backed songs of joy from the southwest corner is now a tattoo parlor—or is that called a “body art salon” in Echo Park these days?

There is a donut shop hanging in there next to the tattoo joint.

All told, the intersection looks a bit tidier than it did a few years back, I suppose.

But it’s only about 25% as interesting as it used to be.

A short walk from the dulled-down intersection of Glendale & Montana will bring you to a “Tiny Home Village” on Alvarado Street that bears the name of Mitch O’Farrell. The local representative on the LA City Council is using your tax money and mine for his brand advertising.

I’m not sure what sort of brand he’s building.

I can tell you that the “tiny home village” might satisfy some deep-seated hipster sense of design, but there’s something fundamentally wrong with this idea. This sort of concentration—with two residents intended for each of the 8-foot-by-8-foot sheds arranged cheek-by-jowl on the lot—is what happens when corruption siphons off money that is supposed to go toward building real housing.

Maybe that’s why the city added plastic strips to block the view through the chain-link fence and locked gates that surround the “village.”

Credit Angel City Brewery for putting an artistic edge on the Arts District with its brickwork on the southeast corner of 2nd and Alameda streets. 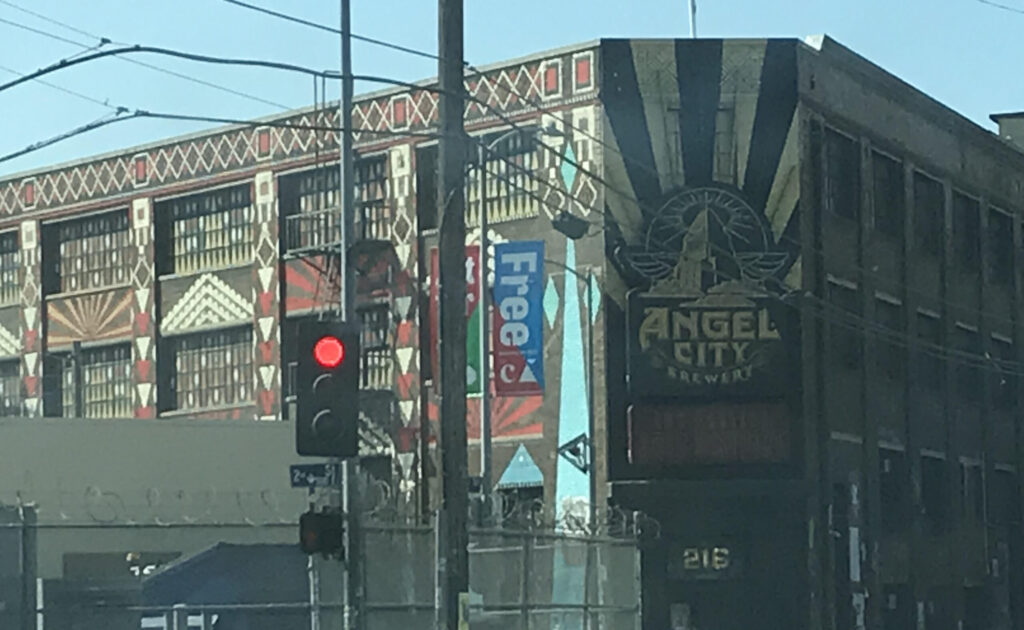