A vitally important story that went largely overlooked last week should reverberate in LA, where City Council districts are being redrawn.

It has to do with Black politicians and the once-every-10-years redistricting process for the U.S. House of Representatives.

The Wall Street Journal addressed both data and politics in its September 9 print edition, which reported that “the growing success of Black candidates in racially diverse communities is spurring a push to distribute Black voters more evenly across newly drawn House districts.”

That’s a socio-political earthquake, a signal that the content of candidates’ character—or their political agendas, at least—has begun to truly outweigh the color of their skin.

Here are some aftershocks contained in the piece, which was tucked away on page 4:

“Black leaders are approaching this process with a different mind-set than a decade ago, with more arguing that Black political representation no longer rests on a need to pack Black voters into highly concentrated districts.”

The effects are likely to be bi-partisan, according to the report, even though most Blacks elected to office throughout the U.S. are Democrats:

“Previously, many Black officeholders had argued for concentrating Black voters in House districts where they would form a majority, often leading to the election of Black lawmakers. Republicans in many cases were glad to go along, because concentrating Black voters into a district created adjacent districts that were overwhelmingly white and where Republicans had stronger chances of winning.”

The key here is that a new generation of Black politicians such as U.S. Representative Bobby Scott, a Democrat from Virginia, has grown confident about appealing beyond their own racial community and identity.

Scott went so far as to support a lawsuit that cut the number of Blacks in his own district in 2016. He nevertheless held his seat while another Black candidate was elected to Congress in a district next door, thanks in part to the Black voters that were shifted over from Scott’s district.

Scott’s move was emblematic of a bold approach that holds the potential to slay the dragon of gerrymandering, which specializes in creating seats that are safe for ideologues on the extremes of both parties.

Angelenos, in particular, should take note as City Council districts are drawn anew—consider the point of view Black politicians are bringing to the process.

And who knows what the portion of the local Latino-American population that isn’t obsessed with social media—modern LA’s equivalent of the silent majority—might think of the fresh perspective on redistricting?

From Kudos to Why I Criticize

The garlands for the Wall Street Journal are earned.

So is the criticism that I occasionally apply to fellow members of the media, which I offer constructively.

I have no interest in being a scold.

I do have a uniquely deep and broad experience in journalism, though—and it ranges into areas of critical thinking and understanding, surpassing the limits of many in the legacy, digital and social media.

So what does that have to do with the lives of my readers?

A lot—I criticize my colleagues because media is essential to how our society understands itself, considers our common circumstances, and acts. That has plenty to do with all of our lives.

We are living through a meltdown and reformation of the media, with financial pressures ramming into long-held principles, not to mention the First Amendment to the U.S. Constitution.

I will continue to put my unique experience and skills to use with criticism of the media in hopes of helping readers maintain an informed perspective on this extraordinary test of our American Experiment.

There’s an obvious critique to register in regard to the Los Angeles Business Journal’s story on September 6 about a $239 million project that’s expected to include 525 apartments, 30,000 square feet of commercial space and a park in South Los Angeles.

The story identified Bakewell Co. as a co-developer of the project, which required various city approvals. It also mentioned that one of the tenants in the commercial space will be the Brotherhood Crusade, a nonprofit organization which was founded by Danny Bakewell Sr., who is a board member as well as the father of Danny Bakewell Jr., vice president of development for Bakewell Co.

Conflict of interest? Fair question—but a reader would have to know about the various interests of the Bakewells to even consider the matter.

I stood some years ago in Danny Bakewell Sr.’s office, where I noticed a plaque that stuck in my mind because I admired it as the declaration of an unapologetic striver. I can’t say I recall it word for word, but here is the gist of it:

“You can beat me—but you gotta beat me.”

Kudos to Bakewell Sr. on being transparent as a boss who’s no pushover but open to challenge.

It’s time for the rest of the media to be just as transparent and up to the challenge of covering Bakewell’s overlapping interests.

Kudos to OC Register, Wondering About Rest of LA Coverage on Haddad’s Move

Kudos to Southern California News Group’s Orange County Register and columnist Jonathan Lansner for timely and prominent coverage of Emile Haddad’s recent decision to step back from day-to-day leadership of FivePoint Holdings LLC, the company that brought Great Park Neighborhoods into being in Irvine.

Credit the SCNG’s LA Daily News for picking up its sister publication’s coverage of the August 23 announcement.

But also give the north-of-Mulholland daily a knock for missing a chance to provide greater local focus on the Santa Clarita Valley in northern LA County. That’s where FivePoint’s Valencia community is rising as the biggest addition of residential development on the horizon in a market that abounds with concerns and coverage of a housing shortage.

At least the Daily News ran Lansner’s piece with its secondary mention of Valencia—which beats the lack of any coverage of Haddad’s move by the LA Times, LA Business Journal and San Fernando Valley Business Journal.

The omission seems inexplicable, given that the Valencia project is underway not more than 35 miles from Downtown LA, well within the coverage area of the three publications that took a pass on the story.

Here’s some additional coverage that laps the rest of the media on coverage of Haddad’s pending transition, which includes plans for him to continue as a senior advisor with the title of chairman emeritus and a seat on the board.

The move seems to make sense for both him and the company he founded as the visionary behind its work in OC and LA, as well as the Candlestick and Shipyard developments taking shape in San Francisco.

It also turns out, though, that Haddad’s decision to step back from day-to-day duties followed a unique experience in management and leadership that wasn’t planned but seems to have become a key factor in determining FivePoint’s new path.

Flash back to the first days of Covid-19, when the pandemic swept through our lives, running ahead of our scientific or sociological understanding. Were we dealing with a virus that could live for days on hard surfaces? Maybe. Would masks be available? Not enough. Could hospitals hold up under the strain? We simply didn’t know.

The four executives made a pact—they would count on one another to take all due precautions against Covid-19. That allowed them to share a large workspace, which accommodated social distance as they worked in sync to oversee the company’s operations through a once-in-a-lifetime emergency.

No one knew at the start of the makeshift arrangement that FivePoint’s projects in Irvine and Valencia would continue to progress, even benefiting from the unexpected, counter-intuitive lift the pandemic gave to the residential real estate market. Counter-intuitive, indeed—the crew oversaw the $355 million sale of a group of office buildings at FivePoint Gateway, and more recently raised eyebrows again with a $328 million sale of land to homebuilders for another phase of Great Park Neighborhoods.

Again, think back to those first days of the pandemic, when most of us thought nothing looked good.

That was the cauldron that tempered the FivePoint executive team in a way no one could have predicted, a program no one would have devised.

Did that lead to Haddad’s decision to step down?

Not really, he told me recently.

But it sure made the decision easier.

And here’s guessing the experience will make life a bit easier going forward for Jochim, who has been promoted to president of FivePoint, as well as Stuart Miller, who is due to join as executive chairman.

Chalk one up for serendipity, with an assist to the law of unintended consequences.

And you can see prior coverage of Haddad’s pending departure here.

The Conrad is a pitch-perfect pick of a hotel brand for the Frank Gehry-designed Grand LA mixed-use development by Related California on Bunker Hill, which looks especially fetching at street-level on approach from the west. 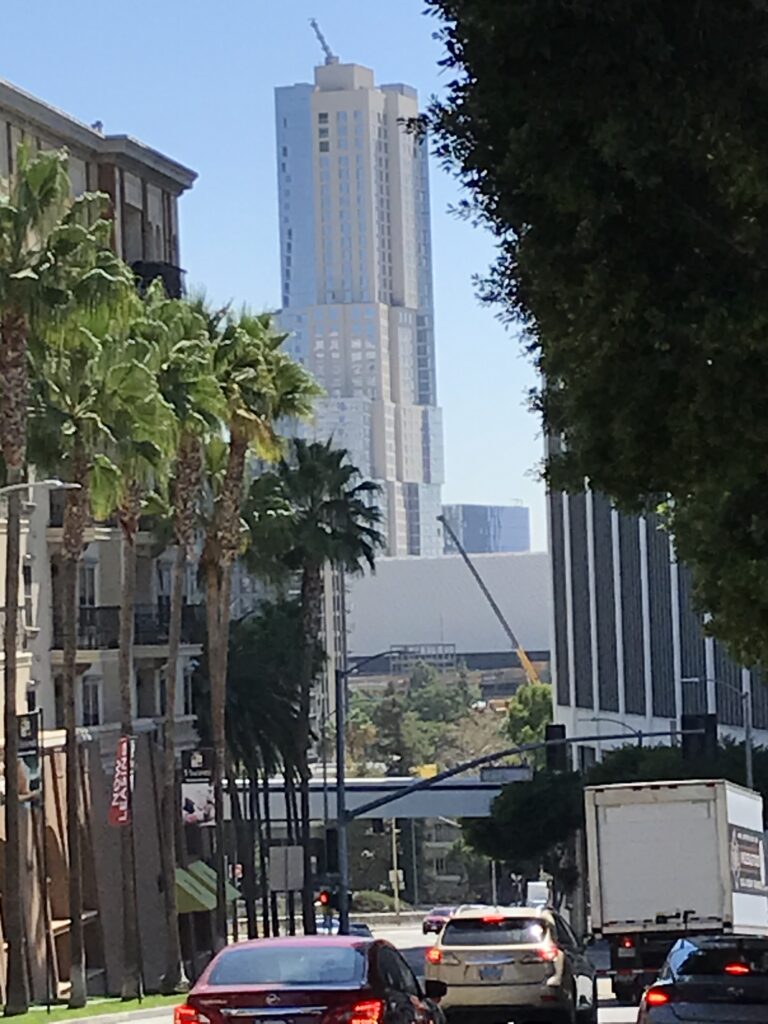