Here’s the latest question about the ethics of public officials and homelessness programs in Los Angeles, prompted by emails among employees of the City of LA, obtained exclusively by SullivanSays:

How do you justify public employees maintaining positions of influence in City Hall while operating “nonprofits” seemingly in position to benefit from public programs?

I’ve asked Kirkpatrick Tyler, who was involved in numerous email threads regarding the development of a homeless shelter on the 1400 block of Paloma Street in Downtown LA. It’s a project that was driven off schedule and over budget by public corruption—a taste of which you can get from prior coverage here. 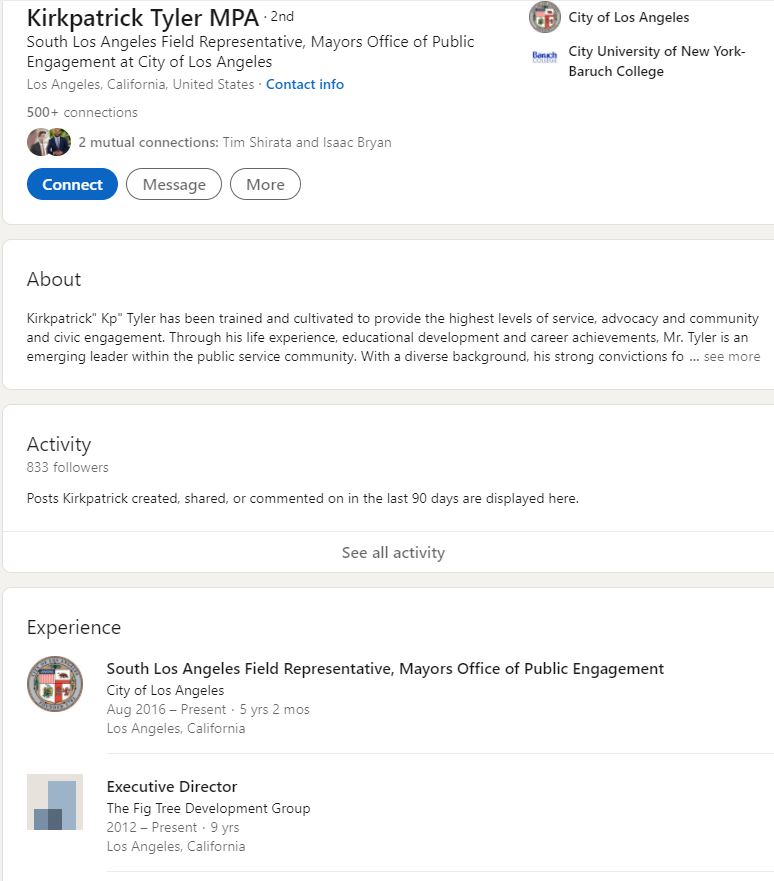 Tyler’s profile on LinkedIn lists him as South Los Angeles Field Representative for Mayor Eric Garcetti’s Office of Public Engagement, as of this writing. His involvement in the Paloma Street deal seems odd because he represents a territory that does not include Downtown. It’s odder still because his LinkedIn profile also lists him as executive director of The Fig Tree Development Group, which bills itself as a nonprofit that “builds strong communities” by offering “a menu of consulting, training and strategy development services” to “residents, organizations, institutions and businesses that serve them…” 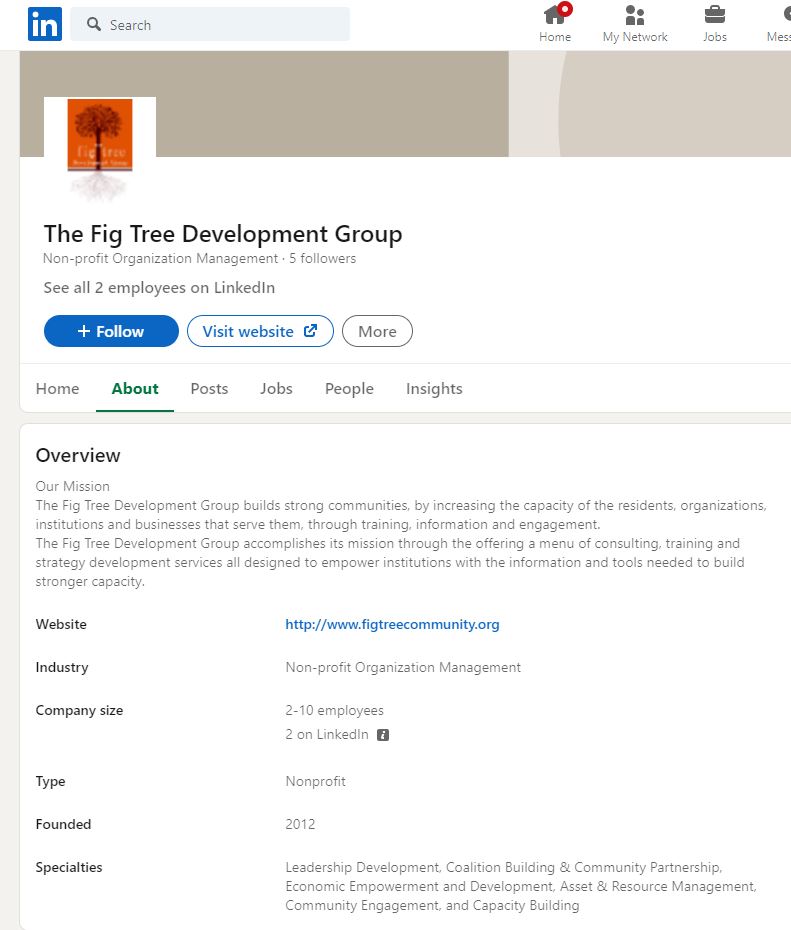 Both Tyler’s and The Fig Tree Development Group’s profiles on LinkedIn claim the organization has been around since 2012. A link to its website at figtreecommunity.org leads to a boiler-plate website hosting service. There’s hardly any information on the organization from nonprofit tracker GuideStar and other sources.

The Fig Tree Development Group does have an address at 1250 S. Western Avenue in the Koreatown district of LA. It also has an Employer Identification Number from the federal government, according to Nonprofitfacts.com. And it lists one employee besides Tyler.

All of that is enough to cash a check—although it seems the outfit doesn’t claim more than $25,000 in annual revenue, so it doesn’t have to file a Form 990 with the U.S. Internal Revenue Service, which would be available as public information.

That leaves a lot of questions—if only Tyler or Garcetti or anyone else at LA City Hall would respond to inquiries on this and other matters regarding the Paloma Street deal.

Keep this in mind the next time someone starts talking about how to address homelessness but fails to mention public corruption.

Because it’s all a churning, cynical shell game unless and until the corruption is exposed and halted.

There’s been another delay in the sentencing of Steven Lopez, the former officer of the Santa Ana Police Department who was indicted on charges of corruption in December. Lopez pleaded guilty in February and has seen his sentencing postponed from May to September and again to April of next year.

He confessed to providing protection to illegal businesses in a sparse guilty plea that’s now more than six months old.

No explanation for the delay in Lopez’ sentencing has been offered by the office of Tracy Wilkison, the acting U.S. Attorney for the Central District of California, which includes LA, OC, Riverside, San Bernardino, San Luis Obispo, Santa Barbara and Ventura counties.

“The reasons for the postponement have been filed under seal,” a spokesperson from the office told me via email. “So, we cannot comment and we will have no further comment.”

That’s nothing new for the feds, who have ridden their high horses rough and ready over the obvious and basic concerns of the people of Santa Ana in this case, failing to provide any information or context on what’s going on in the neighborhoods of the city of more than 300,000.

City officials, meanwhile, appear hamstrung by the feds—Lopez seems to be the dirty cop no one will talk about.

It’s another odd case on the SoCal scene, enough to make me think there is something very big—and perhaps very wrong—going on in Santa Ana.

And that makes me think that the recent media circus of accusations and counter-charges against Santa Ana Police Department Chief David Valentin and cops’ union boss Gerry Serrano—ranging from official harassment to pension-padding—might be just the distraction that the folks moving the shells around want us to gaze upon.

You can check prior coverage and commentary on the federal case against Lopez here and here.

I have no comment on the art that’s being arranged for Destination Crenshaw, a $100 million project that’s getting public and private funding. Its goal is to do something artistic to offset disappointments over a decision to run the Metro Crenshaw/LAX train at ground level through a portion of South LA rather than keeping it out of sight, earshot and traffic with a tunnel.

I won’t comment because there’s no train yet—and no art to gussy up a 1.3 mile length of Crenshaw Boulevard from around Leimert Boulevard to Slauson Avenue. The stretch is expected to eventually get “architectural and streetscape designs by Perkins&Will, landscape design by Studio-MLA, and cutting-edge augmented reality storytelling by Gallagher & Associates.”

There is a first group of seven of the more than 100 artists expected to eventually take part in the project.

I won’t comment on the credentials of the artists in the initial group, either, other than to say they are an accomplished lot, including Charles Dickson, Melvin Edwards, Maren Hassinger, Artis Lane, Alison Saar, Kehinde Wiley and Brenna Youngblood.

I will, however, comment on their ages, which trend decidedly older. Five of the inaugural seven are Baby Boomers or older, ranging in age from 65 to 94. The other two are Gen Xers, in their 40s.

Missing are any Millennials—the same crowd that surprised much of LA with their numbers and spirit in the wake of the murder of rap musician and entrepreneur Nipsey Hussle in South LA two years ago.

The head-scratcher here is why Destination Crenshaw’s governing board, advisory council and committee on public art didn’t simply add a younger member or two to the cohort—they wouldn’t have had to cut any of the older artists.

The project is billing itself as the “Nation’s Most Important Collection of Outdoor Black Art”—reason enough to include a point of view from the Millennial generation right from the start, not to mention Gen Z.

Design Can’t Do It All

One more comment on Destination Crenshaw, which is “being redesigned into an economically thriving business, art and cultural corridor for Black L.A.,” according to its backers.

Design is a start but not any guarantee of a result—and there are too many public-improvement projects on LA’s streetscape that have quickly gone from big promises at ribbon cuttings to embarrassing examples of negligence.

More reason than usual to wonder about the Los Angeles Business Journal’s recent “Wealthiest Angelenos” list of local billionaires, which pegged a 6%  drop in biotech veteran and LA Times owner Patrick Soon-Shiong’s net worth to $20.4 billion but seems to have stopped short of working the math to a logical conclusion.

There are all sorts of admitted imperfections involved when publications set out to peg the net worths of individuals. There seem to be even more when it comes to Soon-Shiong. The LABJ estimate for him has run about double the determinations of Bloomberg, Forbes and even the local publication’s sister title in Orange County in recent years. 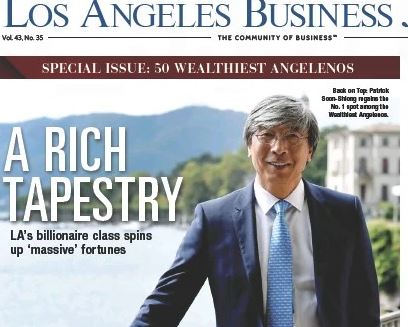 The LABJ’s writeup on Soon-Shiong in its August 30 edition notes that the value of his shares in publicly traded ImmunityBio Inc. fell by about $8.6 billion between the time the company went public via a merger and the point at which the LABJ did its latest figuring.

The big dip is based on a high-water mark during the year, notched in the run-up to the merger, leaving the math a bit fuzzy on a 12-month comparison of Soon-Shiong’s net worth. There’s reason to believe, however, that his own estimates of personal wealth included a high value on ImmunityBio before it went public. That view indicates the post-merger drop in its share price in recent months—the $8.6 billion hit cited in the writeup—would equate to a decline of around 40% in Soon-Shiong’s net worth compared with the $21.8 billion the LABJ estimated for him a year earlier.

And that would mean Soon-Shiong’s holdings besides his proprietary interest in ImmunityBio—a mix of other drug companies, various financial instruments, real estate, a stake in the LA Lakers and outright ownerships of the LA Times and other titles in his money-losing group of newspapers—combined for an increase in value of around 70% to trim his losses as reported by the LABJ.

That’s a great year even given the pandemic premium a lot of rich folks have reaped lately. Consider that the whole batch of the 50 billionaires on the LABJ’s list—and it’s fair to assume they’re pretty good at handling money—combined for a collective gain of about 17% since the publication’s prior annual edition.

Soon-Shiong might fancy himself as the smartest guy in the room, but I doubt very much he’s smart enough to do four times better on his investments than the average LA billionaire.

And I have to wonder if someone at the LABJ went subversive for a bit of fun with the whole thing. Check the secondary headline in the shot of its cover story above—and consider the use of the term “spin” and the quotation marks around the word “massive.”

Here’s an appropriate name from one of LA’s truly great restaurants: Laura Fryer, general manager of Bestia, just off Santa Fe Avenue south of 7th Street in the Arts District.

Last week’s announcement of the Orange-based Chapman University System’s sale of its Brandman University in Irvine to the University of Massachusetts was the official bow on a deal that had been in the air for a while, with numerous trends factoring into the mix, as initially reported here more than a year ago.