An economy is much more than financial activity.

Anyone who forgets that basic fact amid the Covid-19 pandemic should visit Peklar Pilavjian at the St. Vincent Jewelry Center in Downtown Los Angeles.

Pilavjian represents one of several families that jointly own the center, which gathers strands of the Armenian, Korean, Indian, Iranian and Israeli diasporas under one roof in the city’s Jewelry District.

He prefers to spend a good deal of time in a small office on the ground floor, with its view of the booths where shoppers buy wedding rings, watches, earrings and other jewelry at the sort of bargain prices to be had when the retailer is just an elevator ride from the manufacturer.

Pilavjian has done well for himself in America, working hard to gain some wealth and influence. He has earned trust and respect for his integrity and wisdom in the Jewelry District and beyond. 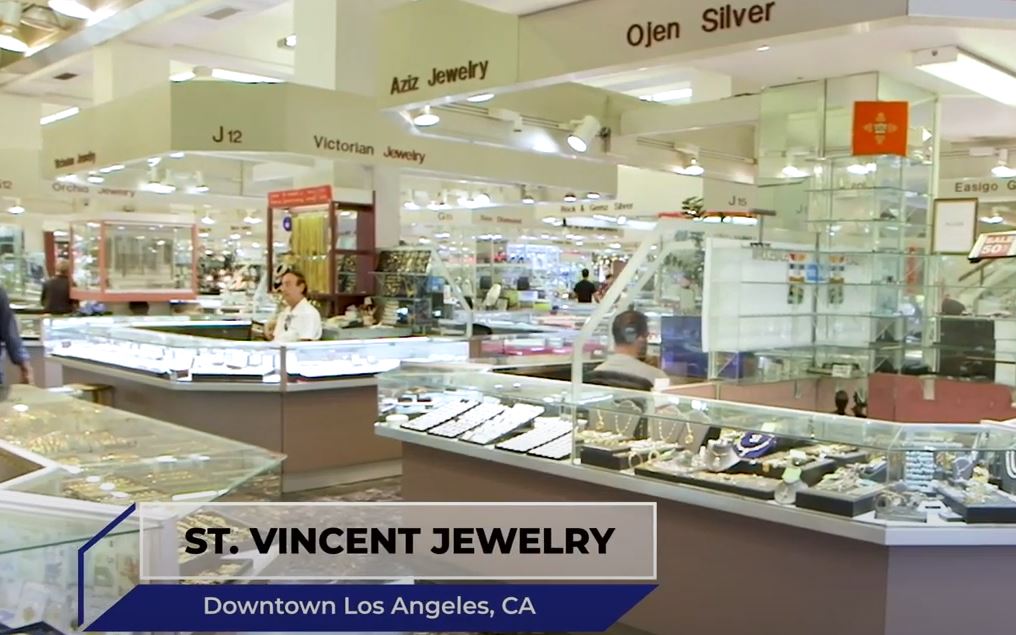 A lot of Pilavjian’s credibility undoubtedly has to do with the window of his small office, where he’s generous with his time and the Armenian coffee that can be ordered up and delivered on swinging trays that summon the feel of the Ottoman Empire. The view reveals the tenant merchants and merchandise and customers and the commercial and social bonds that make up an economy. It’s a constant reminder of the economic activity that forms the basis of loans and other instruments of financial activity.

The scene also offers a reminder that economic activity is based on actual assets and the people who hold them.

And getting our economy over the effects of Covid-19 will be all about assets and people, according to Pilavjian.

The first order of business is the health of the people, Pilavjian says—and then the mission should be to hang on to assets.

The commercial building’s owner must try to hang on to the building—and that might mean a break from a lender.

Tenants must try to hang on to their employees—and that might take a break on rent from the building’s owner.

The tenant’s employees must try to hang on their residences—and that might take a break from a landlord.

The landlord must try to hang on—and that brings us back to the lender.

It’s a safe bet that lenders will get a break from the federal government, which has shown a penchant for helping the finance sector in a crunch—history tells us there’s every reason to believe they’ll come out of this OK.

The challenge will be to ensure that whatever programs are devised to help lenders won’t relegate actual assets and people to the status of an afterthought.

Back in early December, when Covid-19 was just a whisper, I was doing some Christmas shopping at Row DTLA. It’s a lovely collection of hip shops and foodie-styled restaurants wedged between Skid Row and the industrial edge of Downtown LA.

I found it lovely mostly because it was nearly empty at the peak of the holiday shopping season, with shoppers scarce and parking easy.

Only five years ago an open parking lot would have been filled with well-worn Toyota Corollas and Plymouth Voyagers and Ford Fiestas—the vehicles of blue-collar LA. Thousands of workers animated an honest-to-goodness factory there, cranking out T-shirts and other goods for American Apparel back then.

You can still see the markings of the old garment operations on the buildings at Row DTLA—painted block letters spelling “Made in Downtown LA,” a faded sign that once directed visitors to Distribution.

The open lot that was once filled by the cars of those workers sits empty now.

I called Dov Charney, who built American Apparel into a domestic manufacturing operation with more than $600 million in annual sales with an obvious marketing flair and less-obvious genius for industrial production.

Charney lost the company to a combination of factors. You can Google him and take a gander for yourself. There will be lots of racy stuff, to be sure, but there’s room to chalk his loss of control of American Apparel up to some questionable financial activities by others rather than any failure of fashion or production or imagination or hard work on his part.

I mentioned to Charney that I was standing outside the headquarters of his old company and looking at a hip center of gentrified desire that’s taken the place of the factory that used to buzz with thousands of workers. I mentioned that it’s been repackaged for retail, cordoned off from the grit of its neighbors—and was doing hardly any business at the height of the holiday shopping season.

“That’s the financialization of the American economy,” Charney said.

Charney has been on the sidelines of polite corporate society since he lost American Apparel.

Then came Covid-19, and Charney turned his new operation—Los Angeles Apparel, which now employs hundreds in the heart of South Los Angeles—toward making the personal protective gear that we need so very much.

He also knows that all the noise over “gentrification” that surrounds developments such as Row DTLA has provided cover for the financialization of our economy.

About 45 miles south of Charney’s factory is the headquarters of FivePoint Holdings LLC in Irvine, where Chief Executive Officer Emile Haddad oversees what is perhaps the most consequential builder of mixed-used communities in California these days.

FivePoint’s Great Park Neighborhoods in Irvine is still rising; a new community has recently gotten underway in Valencia in the Santa Clarita Valley in LA County; and FivePoint is working on two major additions to the housing stock in San Francisco, the most constrained residential real estate market this side of Manhattan.

Haddad thinks more broadly than his own industry or company, though—likely one reason Governor Gavin Newsom last week appointed him to the Task Force on Business and Jobs Recovery, a panel of business and civic leaders who will advise on state policy on reopening the economy.

Haddad will bring a unique viewpoint—his thinking is leavened with some hard-earned wisdom from his experience in the years-long civil war that left a trail of death and destruction in his native Lebanon in the 1970s.

Haddad sees some gaps in America’s economy that have been revealed by Covid-19.

“My family lived through the whole war, and we never ran out of toilet paper,” Haddad said.

The barren shelves in the household goods aisles of stores amid the current pandemic indicate “this is a time to reset our perspectives on life,” he added.

Indeed, it was before Covid-19 captured the nation’s attention that Haddad addressed a board meeting of USC’s Lusk Center for Real Estate, presenting the notion that it might be time to reconsider some basic aspects of the financialization of our economy.

“I always run the company with a disaster plan,” he said. “That’s what comes from surviving a war.”

That explains why Haddad would raise a point about supply chains weeks before anyone had reason to scramble for toilet paper.

“Everyone has been looking at it the wrong way, especially in the years since the Great Recession hit in 2008,” he said. “Every company in the world has shifted to just-in-time delivery. Inventory has been looked upon as an inefficient use of capital by Wall Street.”

Wall Street’s perspective on inventory presents a window into the surprising struggle to produce masks at the start of Covid-19’s contagion in the U.S. The same view links to the financialization of our economy.

Haddad builds communities. He doesn’t run from his desire and responsibility to make a profit in the process. He knows, however, that his company’s chief assets are talent and vision.

You might also refer to those assets as people and patience.

Perhaps that’s why Haddad was ahead of a pack that includes the likes of Berkshire Hathaway’s Warren Buffett and JPMorgan Chase Chief Executive Jamie Dimon in taking a stand against one of the most obvious symptoms of financialization: short-term perspective.

Increasing numbers of business leaders are declining to give Wall Street analysts “guidance” on quarterly sales and earnings for publicly traded companies.

The point for Haddad, Buffett and Dimon, among others, is to get away from the sort of short-term thinking that leads companies to make tactical moves to meet quarterly expectations at the expense of long-term strategic planning and execution.

“A lot of what you’re seeing in the economy is driven by people who have a lot of influence on perceived values,” Haddad said, referring to Wall Street analysts.

That led a lot of companies to use capital to buy back shares of their stock in recent years, helping prop up their value but also leaving some short of money when Covid-19 struck.

“People are going to reassess the use of capital,” Haddad said. “What has gone on with the airlines using capital to buy back their shares in the years before the pandemic will be talked about for years.”

You’ll find a risk-management specialist named Larry Scherzer at the other end of SoCal. His Scherzer International deals with companies from various industries from offices in Warner Center in the San Fernando Valley, providing them with assessments on everything from executive hires to credit writing and reputational risks that might come with certain customers.

Scherzer has already heard from numerous clients on some of the obvious as well as unexpected consequences of the pandemic. Scherzer cited the possibility that real estate investment trusts could go from safe haven to risky business for investors several days before the Wall Street Journal covered that angle on April 7.

Scherzer offered another insight on the moving target of the pandemic that undoubtedly holds many unforeseen consequences—Covid-19 has put the collision course of technology and corporate culture on fast forward.

“The younger generation prefers to work at home while the older generation has concerns about how the detachment from the office affects corporate culture,” Scherzer said.

We’ve been moving toward the collision for years, Scherzer said, but now the technology for video conferences is so much better that it raises the question of how much office space anyone needs.

Scherzer points to big accounting firms as templates—they’ve been trimming space for years, with auditors working offsite and using common cubicles when needed in the home office. He expects that companies that develop virtual skills and habits while getting through the pandemic could be forever changed.

But how do you transmit a sense of organizational culture through virtual communications?

Don’t expect it to be a simple continuation of a pandemic-borne trend.

The same technology that has proved a wonder in accommodating work from home doesn’t quite cut when it comes to giving workers a sense of the purpose, mission and values that make up an organization’s culture.

“I don’t think they’ve found that effective for their culture so far,” Scherzer said. “Companies and leaders and their employees need chances to talk about what’s important.”

Scherzer recently told California Lutheran University’s inaugural Corporate Leaders Breakfast—via digital newsletter in lieu of an in-person event—that a review of operations under pandemic conditions has extended to the top of his organization.

“I asked the management team what changes they observed in my leadership style,” Scherzer said. “They said that I have been quicker in making decisions, noting the shift to remote work in about 48 hours. They also mentioned that I fine-tuned my communication so that information and action items are presented more clearly. This has been challenging because of the rapid dissemination of conflicting information that comes from competing sources and becomes quickly outdated.”

There’s no conflict on a basic precept put forth by Pilavjian, Charney, Haddad and Scherzer—each of whom views the challenge of getting through Covid-19 and onto whatever is next from decidedly different professional and personal perspectives.

Each, nevertheless, sees people as the primary asset of our economy.