I’ll start with a Tweet from Easter/Passover week by Ann Lau, chairperson of the Chinatown-based Visual Artists Guild:

“To Fellow #Christians, please do not put #OurLord to the test. #StayAtHome.”

I’ll add the suggestion that people of all faiths should consider Lau’s point for a while longer.

It’s not clear why the LA Times has consistently cast the newspaper’s owner, Patrick Soon-Shiong, as the point person and prime contributor on plans to reopen St. Vincent Medical Center as a center for Covid-19 treatment and research.

The question matters in light of the web of enterprises and interests Soon-Shiong oversees under his Culver City-based Nantworks LLC and through a family foundation. Is the biotech billionaire-turned-publisher using his newspaper for benign ego boosts? Or does his reputation for self-dealing suggest some malignant ambition is shaping the paper’s coverage of the pandemic?

All of that is reason to wonder about this report on April 2 by his newspaper:

A family foundation controlled by Dr. Patrick Soon-Shiong is seeking to buy an empty hospital near downtown Los Angeles and turn it into a sprawling campus for COVID-19 patients and coronavirus research.

Does that give you an impression of individual action, bold leadership and heartfelt generosity on Soon-Shiong’s part?

Now consider the April 7 announcement from Kaiser Permanente on plans to join with Dignity Health, the County of Los Angeles and the State of California to reopen St. Vincent Medical Center to handle Covid-19 patients.

Dignity Health and Kaiser Permanente, two of California’s largest not-for-profit health care systems, are providing expertise in establishing the Los Angeles Surge Hospital and will oversee management at the facility.

Kaiser Permanente also mentioned something that the LA Times has not included in its reporting—some specific terms of the lease that Soon-Shiong hopes to assume as the would-be owner of St. Vincent Medical Center.

Here’s the brain trust on the project, according to the announcement:

Kaiser Permanente made no mention of Soon-Shiong, his foundation or any of his companies. Neither did a public announcement from the State of California’s Health & Human Services Agency.

The dual omissions suggest that Soon-Shiong’s role will be primarily as a landlord collecting $2.6 million a month on the deal that the state signed to lease St. Vincent Medical Center—an agreement that would be included in the sale if the bankruptcy court gives final approval to his acquisition of the property at a price of $135 million.

That’s a long way from the impression left by the coverage from the newspaper he owns.

LA Times Editor Norm Pearlstine responded to an initial query about the newspaper’s coverage in an email last week, writing that as “the final reader on every story that mentions Dr. Soon-Shiong, I am responsible for making sure we cover him and his business interests fairly and without favor.”

Pearlstine also said he’d be “more than happy answer your query [and] to defend … more broadly … our coverage of St. Vincent’s.”

The exchange with Pearlstine centered on a separate aspect of the St. Vincent Medical Center coverage—whether Soon-Shiong’s initial bid to acquire the hospital and its 10-acre campus amounted to a case of his using his family foundation for self-dealing.

You can go here to see an analysis of Soon-Shiong’s approach to the acquisition, offered in my column of April 7.

It’s notable that the following day saw California Attorney General Xavier Becerra file a legal objection to the bid by Soon-Shiong’s family foundation, raising concerns about self-dealing by the billionaire.

The LA Times reported that the attorney general’s filing contended that the facts of the bid “may not present a problem under bankruptcy law” but “could be a problem under California laws governing nonprofit public benefit corporations.”

Left out of the same story was the plainer contention by the attorney general that Soon-Shiong’s foundation “should not be found to be a ‘good faith purchaser’” of St. Vincent Medical Center.

Soon-Shiong and his lawyers and accountants then shifted the approach, withdrawing the offer from his foundation and resubmitting a bid via several of his various businesses. The seller of the hospital—Verity Health System of California Inc.—cancelled its license to operate St. Vincent Medical Center as a hospital. Those two moves apparently combined to take the matter out of the attorney general’s purview and put it wholly in the hands of a federal bankruptcy court that’s been moving in a hurry on this deal amid the Covid-19 pandemic, with a final hearing set for April 29, as of this writing.

Why No News on NewsMax?

Watch this space to see if the re-opening of St. Vincent Medical Center ultimately benefits whatever attempt Soon-Shiong is making to develop a Covid-19 vaccine, which would have the most obvious and immediate market demand any product could hope for.

Soon-Shiong last week told Christopher Ruddy’s NewsMax TV that representatives of one of his companies have been in conversation with the U.S. Food and Drug Administration “to move very fast to bring this vaccine to the first human trial.” 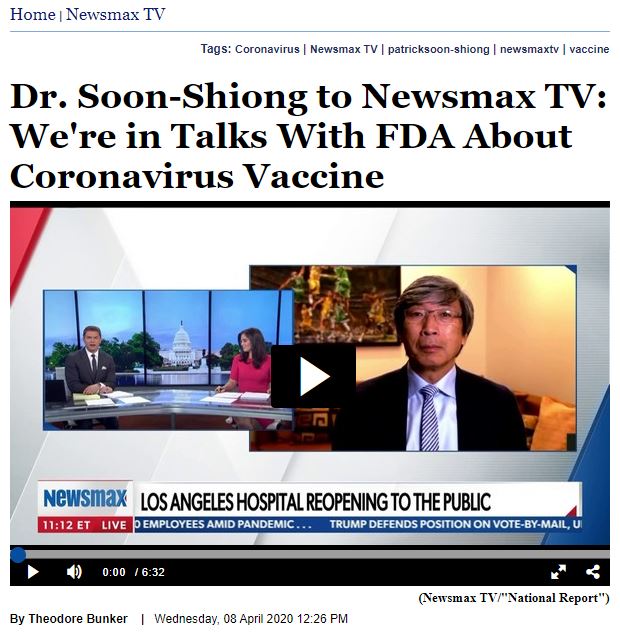 The LA Times made no mention of the April 8 appearance on the cable-news channel.

Put that down as another questionable aspect of the LA Times coverage of its boss—and add this one: Why did Soon-Shiong take that story to a news outlet owned by a confidante of President Donald Trump rather than give his own newsroom the scoop?

The LA Times did follow NewsMax TV in an indirect way that offered some insights on how Soon-Shiong’s web works. A full-page ad in its April 13 edition featured a letter that all at once announced Nantworks’ efforts to develop a Covid-19 vaccine, promoted the LA Times’ mobile app, and gave a higher degree of disclosure on Soon-Shiong’s interests than the publication’s coverage generally provides.

The letter informed readers that Soon-Shiong is the “founder and CEO of a network of biotechnology companies dedicated to finding cures to life-threatening diseases,” adding that his Nantworks has been working 24/7 on “researching the viability of our technology and the potential for a Covid-19 vaccine.”

That last bit seems to fit a pattern for Soon-Shiong: Make a big splash with an initial claim that gives the impression of a lone or grand effort—the sort of ground he reportedly staked in the NewsMax TV appearance—and then walk it back with ambiguous language.

You’d think a newsroom full of journalists might have picked up on the pattern.

OC power player Jim Mazzo might have retired from his post as global president for ophthalmic devices for Carl Zeiss Meditec AG, but he still serves as a director of a South Korean-born, Menlo Park-based startup that has clearly shifted gears with Covid-19 in mind.

Avellino Labs is a precision medicine and genetic testing specialist that tapped Mazzo for his experience—he’s been a top exec at Allergan, Advanced Medical Optics and Abbott Medical Optics—as it set about to develop genetic tests and gene therapies for various diseases of the eye and beyond.

The company initially sought to meet an internal challenge posed by Covid-19. It started developing tests for its labs in China and South Korea—home of founder Gee Lee—to determine whether any of its own workers had been infected by the coronavirus.

A shortage of Covid-19 testing kits in the U.S.—and especially the area around Avellino’s headquarters in Northern California—took the effort wider. The company got FDA approval in a matter of weeks for a test that can provide results in four-to-six hours once it reaches the lab.

The effort went “all hands on deck” in early March, according to spokesperson Eric Bernabei, leading to sales to various public agencies—a line of business that’s believed to have barely covered costs but helped to narrow a crucial gap in public health services.

Onto a silver lining that can be found in reports that Downtown LA-based Oaktree Capital Management LP is raising a fund for investments in distressed debt with an eye on locating opportunities as the world sorts out a new reality.

This looks like preparation for a first step toward a recovery—gathering up capital for the calculated risk-taking we will need amid the fight to get the upper hand on Covid-19 and, eventually, our economy.

Bloomberg has reported that Oaktree Co-Chairman Howard Marks recently wrote to investors that “it’s clear that companies of all kinds are likely to find that revenues decline faster than costs, run into cash flow problems and be denied access to the capital markets.”

Not much detail on Oaktree’s plans, but past performance offers cause for optimism. An earlier Bloomberg report indicated the firm invested more than $500 million a week in the 15 weeks following the Lehman Brothers bankruptcy that signaled the crash into the depths of the Great Recession at the end of 2008.

Those investments in various securities apparently turned out well for Oaktree—but not without helping provide some stability to an economy that was teetering and could have gone over the brink.

Congratulations to Rob Eshman, former editor of the Jewish Journal in LA and newly hired national editor of the Forward, which has been serving readers in New York for 123 years.

Eshman will remain based in LA, where he teaches at USC’s Annenberg School for Communication and Journalism and his wife, Naomi Levy, serves as a rabbi and founder of the Nashuva spiritual community based in Brentwood.

Eshman will write a regular “Letter from Los Angeles” column and focus more broadly on “four key regions” with significant Jewish populations, according to the Forward, including his home state and South Florida, Chicago and Boston.

His hire was billed as part of a national expansion for the Forward, which recently went all digital and now seeks to help fill some gaps left by recent closures of Jewish community newspapers across the county.

The Jewish Journal has in recent years hinted at an expansion into the Forward’s home territory of New York City under David Suissa, who replaced Eshman as editor and also serves as publisher at the Koreatown-based weekly.

There have been no announcements of a move into NYC by the Jewish Journal, and Suissa didn’t respond to an inquiry last week.

Diane Pritchett, executive director of the South Coast Metro Alliance in OC, weighs in on the emerging Covid-19 vocabulary with a preference for “physical distancing” over “social distancing”—and that gets deeper the more you think about it.