How do public officials in charge of developing homeless shelters go from dismissing a proposal to pay $25,000 a month for 17,000 square feet of space as “unheard of!” to doing the deal for $35,000?

You could ask Elizabeth Boyce of the Housing for Health program of the County of Los Angeles. She’s the official who used the phrase “unheard of!” in regard to the $25,000-a-month figure as a starting point for negotiations on the space in a building on the 1400 block of Paloma Street on Downtown LA’s industrial edge.

Also questionable is why Boyce apparently didn’t raise a word of protest or have any questions herself when the deal went ahead at $35,000 a month, according to emails obtained by SullivanSays.

You might also ask Christina Miller, senior project manager for homeless strategies in the office of LA Mayor Eric Garcetti at the time—and now a senior policy fellow at the Washington, D.C.-based National Alliance to End Homelessness. The cache of emails SullivanSays recently obtained reveals Miller assuring Boyce that the city would be able to pay for the lease, without regard to price, since the “Mayor’s office is fully supportive of this.”

Miller also noted that the office of now-indicted City Councilmember Jose Huizar would be the "ultimate decision maker.” Then she offered to “find out what their feelings are on that front,” asking her colleague at the county, “Would you like me to do that?”

I’ve attempted to question Boyce, Miller, Garcetti and a host of other representatives of the city and county, as well as private-sector and nonprofit entities involved in the Paloma Street deal.

Still no response from any of them—but the emails between Boyce and Miller help fill in the story, and I have a lot more to go through.

That’s plenty of reason to stay tuned on this tale of how the Paloma Street facility illustrates why homelessness is a public health crisis for many Angelenos—and a profit center for a select few.

You can get more background from prior coverage here.

No one addressed homelessness or corruption specifically during a January 22 “Ask the Experts” panel hosted by Chapman University in Orange—I’ll swing back to that later.

It’s worthwhile to first consider the subject of “Revitalizing California’s Business Climate” that drew the leaders of business advocacy groups in the state’s three largest markets—Tracy Hernandez of LA County Business Federation, or BizFed; Lucy Dunn of the Orange County Business Council; Jim Wunderman of the Bay Area Council—and a statewide representative in Rob Lapsley of the California Business Roundtable.

Dean Thomas Turk of Chapman’s Argyros School of Business moderated the talk, and Chapman Presidential Fellow Joel Kotkin and Business Professor Marshall Toplansky offered data to inform the discussion, adding some thoughts of their own.

Kotkin, who also is a globally recognized journalist and author, offered a preview on some research that is due out in April and shaping up as a double-whammy for California. Indicators point to a decline in numbers of foreign-born arrivals planning to settle in California, a trend that compounds concerns about recent data showing net outflows in terms of domestic migration patterns.

“If the foreign-born stop coming to California, we’re in real trouble,” Kotkin said, noting that Texas, Tennessee and other states seem to be more popular destinations for immigrants these days.

Kotkin’s concerns are especially notable, given his authorship of Tribes, a seminal book published a quarter century ago. The work blended empirical data with journalistic insights to crystalize a sense of the crucial contributions immigrants and ethnic communities have made in California and elsewhere in roles ranging from laborers to entrepreneurs. 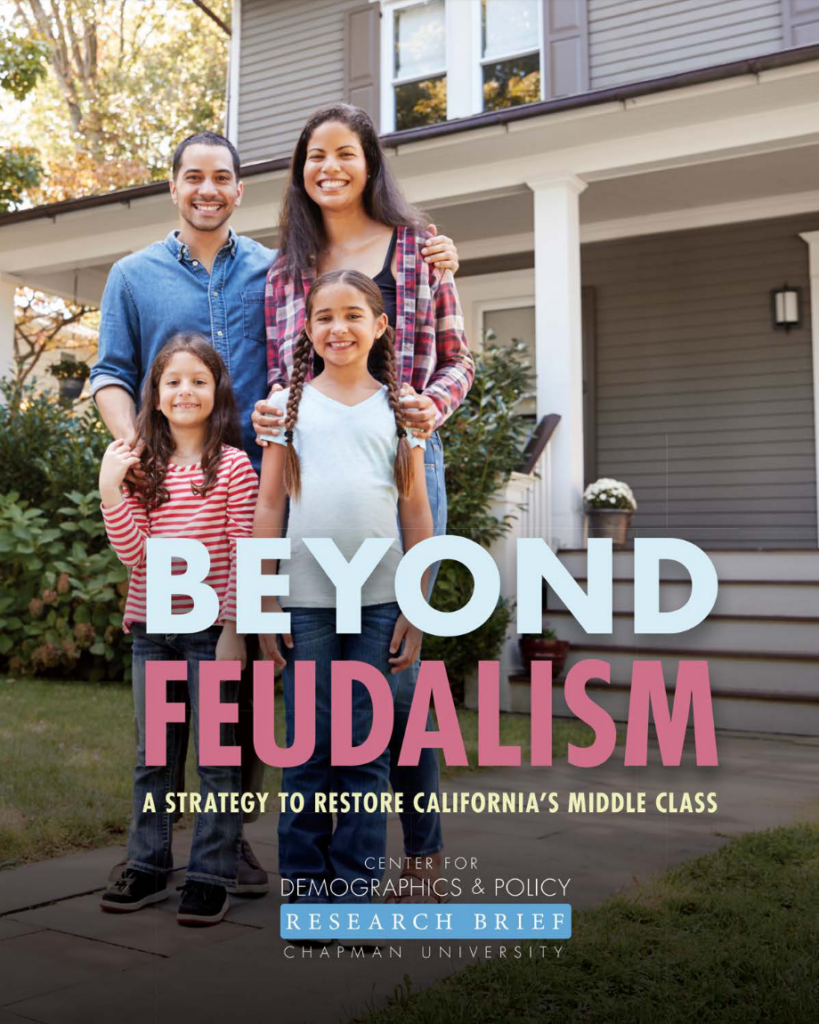 The changing fortunes of the state are reflected in a more recent piece of work authored by Kotkin and Toplansky titled Beyond Feudalism: A Strategy to Restore California’s Middle Class. The study, which came out last year, sounds serious warnings about current trends in California in terms of taxation, regulation, infrastructure and education. All of those were cited by panelists as among the reasons the state is poised to post a decline in population for the first time in its recorded history.

There’s also been an outflow of businesses from California lately, with stalwarts and startups ranging from Oracle to Tesla shifting corporate headquarters out of state.

Homelessness and corruption didn’t come up in the Chapman talk—the panelists had plenty of strait-laced critiques of various policies that are more plainly part of the problem.

I’ll add both homelessness and corruption to the list—and suggest they are intertwined to an alarming degree in too many places around here.

The shifts in California aren’t all outflow—some areas are gaining population on an intramural basis.

Kotkin told the Chapman audience that the Inland Empire stands out as a gainer these days.

The work-from-home trend fostered by Covid-19 is an obvious boost for the Santa Clarita Valley, freeing up employees to consider the area, which happens to have a ton of natural beauty and strong rail and freeway links for workers who are still commuting.

Schroeder’s outlook is confirmed by the strong pace of commercial and residential construction in the area, with new apartments in the quaint area known as Old Town Newhall going fast at around $2,000 a month for one-bedroom units.

Last week’s item about the Valencia community that Irvine-based FivePoint LLC is building in the Santa Clarita Valley—a plan formerly referred to as Newhall Ranch—brought this perspective from Martin Brower, dean of OC’s communications corp.

“... I liked your coverage of the FivePoint Valencia project moving ahead. In 1966, I was director of public relations for the Newhall Land & Farming Company, and Tom Nielsen was president of Newhall's California Land Company, developing Valencia. We could not get a homebuilder to be interested. Shortly after I left, Nielsen got the first homebuilder to take down some land—a young man named Don Bren, who was then building in Mission Viejo.”

Rumor has it that Bren guy ended up doing pretty well with another company down in OC.

There is no shortage of hopes pinned on vaccines for Covid-19, with a couple of versions already approved. There’s still plenty of room to push for more, though, and that’s what City of Hope is doing. The organization got a recent boost from semiconductor specialist Broadcom Inc., a neighbor of City of Hope Orange County in Irvine. This edition of the podcast features Dr. Don J. Diamond discussing City of Hope’s efforts to develop another Covid-19 vaccine.

Congratulations to Gabriel Lerner, longtime executive editor at La Opinion, who recently shifted to an editor emeritus role with plans to keep a hand in the publication’s op-ed pages.

And to Armando Varela, who takes the reins as the new executive editor at the Spanish-language daily.

Varela is “talented and experienced and will move La Opinion forward,” Lerner told me via email. “I will now have time for the site I founded years ago, HispanicLA.com, as co-editor—and [to] participate in other projects.”

The same legacy media outlets that kept track of the woes that buffeted Snap Inc.  over its first two years as a publicly traded company ought to head over to the Venice district of LA for another look at the social media outfit.

Snap’s market capitalization was around $80 billion as of this writing, more than triple the number as of its initial public offering in 2017, and up by more than 150% over the past 12 months.

New York-based investment bank Goldman Sachs expects Snap shares to climb another 35% or so, attributing the outlook to the company's innovative capability and the growth of digital advertising in general.

It appears that Snap’s performance continues to validate the decision by cofounder Evan Spiegel and Bobby Murphy to turn down a $3 billion buyout offer from Facebook in 2013.

Makes me wonder if OC-based Palmer Luckey wishes he had been as stubborn in holding on to his Oculus VR instead of taking Facebook’s $2 billion in 2014.

Daily newspapers can only cover a fraction of their territories on any given day—but give the Orange County Register credit for offsetting some of what’s missing by zeroing in on the biggest news of the day for readers.

The daily often manages that much by showing some hustle to get news in front of readers as soon as possible, and providing news judgment that’s reflected by page placement, graphics and photography, and the size of headline types.

The Register’s print edition of January 22 offered a good example, with the story of UC-Irvine’s plans for a new hospital the unmistakable lead of the front page, and a report on homebuilder Lennar’s $100 million lawsuit against the City of La Habra getting similar treatment in the local section. 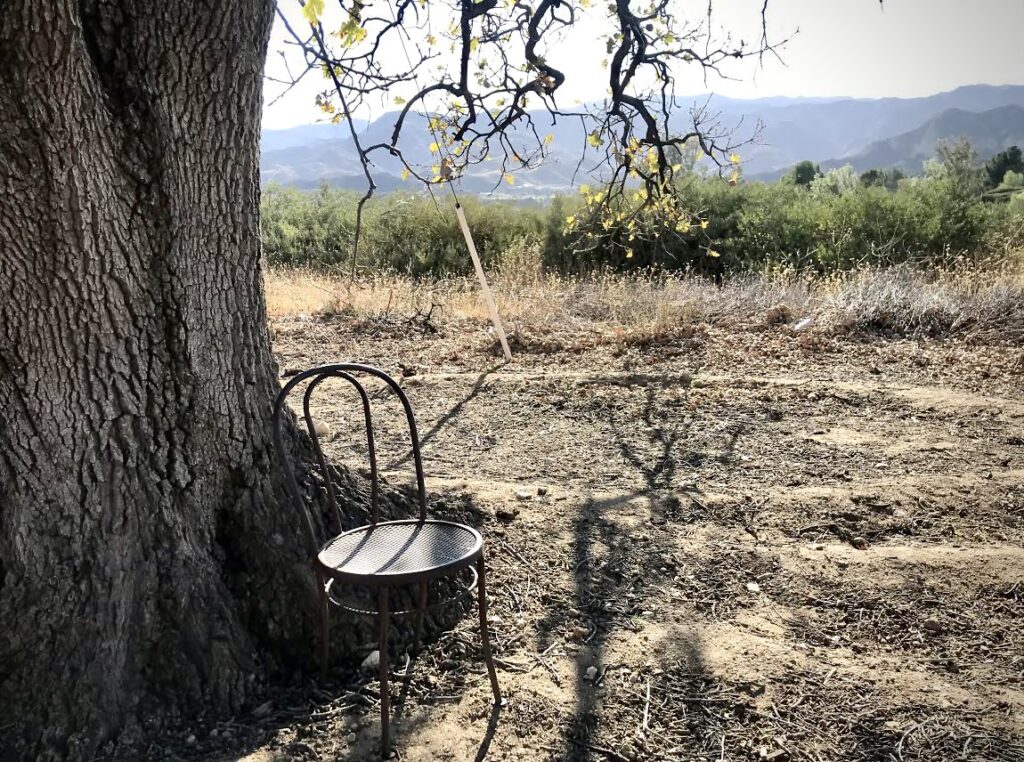 Back to the Santa Clarita Valley, where a casual walk down one of the area’s many gorgeous trails will get you to this throwback style of social distancing in the form of some solitude.