There’s a composite image on the website of Irvine-based FivePoint Holdings LLC, the master planner behind the Great Park Neighborhoods and FivePoint Gateway in Orange County, along with Valencia in the Santa Clarita Valley of northern LA County.

It starts with a photograph of FivePoint Chairman, Chief Executive and President Emile Haddad on the floor of the New York Stock Exchange on the day the company went public in May 2017. The photo is overlaid by the company’s Roman-numeral 5 brand. An accompanying quote has Haddad, who founded FivePoint, saying, “I view what we do here as a vision.”

FivePoint last week announced Haddad will step back from his executive posts on September 30.

Let me disclose now that FivePoint is a sponsor of this column, and I consider Haddad a friend. I could tell you a story about arms-length and objective distance, but the truth is that I practice full-contact journalism. I get to know people. I like some of them—and the entrepreneurial nature of this enterprise means I will do business with some of them, too.

I’ll leave it to the marketplace—to my readers—to decide if my journalism remains trustworthy in such cases.

Back to Haddad, who has said the seemingly sudden announcement of his pending shift was not because he is sick or was asked to step aside.

That seems to align with the company’s decision to keep him on its board as chairman emeritus and as senior advisor after he leaves his executive roles at the end of September.

Haddad also has said he plans to pursue several interests once he is freed from the restraints and quarterly requirements that come with an executive post at a publicly traded company.

That aligns with what I know about his eclectic interests and engaged intellect.

Might some shareholders have wanted new direction for FivePoint and its stock, which has lagged peers in terms of overall returns in recent years?

That’s not a stretch—although nothing in the movement of the company’s share price in the days after the announcement regarding Haddad indicated such sentiment was widespread.

Might Haddad have beaten them to the punch in seeking out new directions of his own?

FivePoint’s plans have come to fruition to a remarkable degree in Irvine and Valencia despite enormous obstacles over the course of decades on both projects. There’s plenty more to do, no doubt, but the strategic direction is set.

Now think again about Haddad’s quote—FivePoint as a vision.

Yes, that might displease some shareholders, who would rather hear a CEO talk about the outfit as an enterprise, or a profit center, or a stock.

They’re entitled to that view, but I think it’s clear they’ve gotten their value out of Haddad. I’d venture a guess that there aren’t many leaders who could have brought either the Great Park Neighborhoods or Valencia into being, let alone both.

Might it now please Haddad to spend his time as a visionary?

Might it all work out well, with FivePoint benefiting from Haddad’s expansive vision as his longtime colleague Lynn Jochim ascends to company president and continues overseeing day-to-day operations while Stuart Miller, the top gun from Haddad’s prior team at Lennar Corp., steps into the executive chairman’s role?

Consider this a “Buy” rating.

Just so long as you’re willing to buy into the vision as well as the stock.

There’s a lot to like about the recently unveiled, $50 million renovation of the Santa Barbara Museum of Art even before you get to a recent link to LA that speaks well of the art world.

Start with the gorgeous greeting that visitors get from the airy arched entryway that’s anchored by the Lansdowne Hermes, a 2,180-pound, 1,900-year-old depiction of the Greek god sculpted of marble. 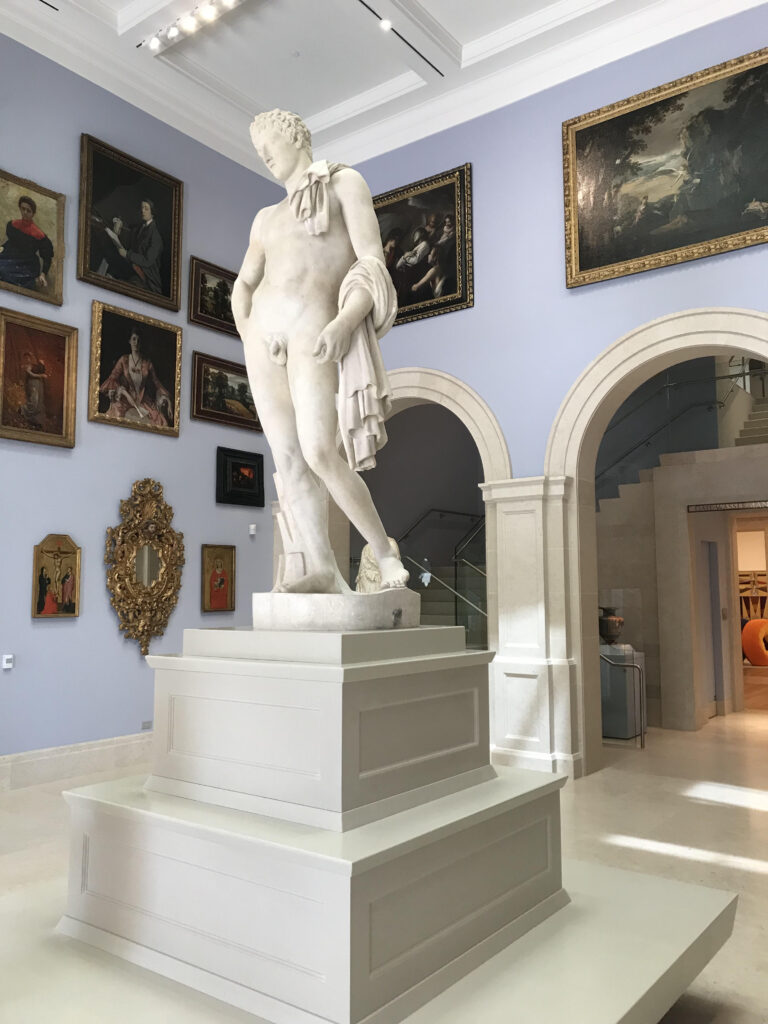 Consider that the new look includes a number of new galleries that reflect a growing mission—one for photography, another that adds new media to the museum’s presentation, and the first dedicated space for modern works.

My personal preferences are pleased by the size of the museum—you can take your time and really take in the works in a matter of several hours.

That’s a laudable achievement for a museum that is encyclopedic in range if not in size.

It also speaks to a sweet spot that comes from Santa Barbara’s decidedly upscale side. The place has long been an outpost for old and new money from LA and OC as well as other places around the nation and world—and that means the Santa Barbara Museum of Art has some well-heeled benefactors.

Larry Feinberg, the museum’s longtime director and chief executive, calls it a case of an institution that—while located in a relatively small regional center—nevertheless goes well beyond provincial influences.

That doesn’t leave regional artists short-changed, by the way. A stroll around the museum in Downtown Santa Barbara reveals no shortage of locals who benefit from visitor traffic that the museum helps spur to galleries. A quick visit to the Sullivan Goss Gallery (no relation) for a look at Nicole Strasburg’s uniquely engaging oil-on-birch panel pieces will tell you that the local art scene is alive and well.

The interplay between the museum and its commercial neighbors isn’t the only example of SoCal symbiosis in Santa Barbara.

UC Santa Barbara Professor Shuji Nakamura, who shared a Nobel Prize for work that produced breakthroughs on LED lighting, has taken an interest in helping the museum display its artworks. The gently effective lighting throughout the place reflects that fortunate link.

Another connection came during the six-year renovation of the museum. The Lansdowne Hermes and 13 other examples of what were billed as the museum’s “superb collection of ancient Greek and Roman sculpture” got valuable exposure on display at the Getty Center in Pacific Palisades. The Getty staff also sent the pieces back to Santa Barbara for its reopening earlier this month with the benefit of a thorough restoration and cleaning.

A follow-up to last week’s item on engineering and construction specialist AECOM moving its headquarters from LA to Dallas:

Might the top executives of the company—which has close ties to LA Mayor Eric Garcetti—welcome some distance as a federal investigation of public corruption continues at City Hall?

And who could blame them? It seems Garcetti is anxious to get some distance himself, with a recent three-week diplomatic charm course in Washington, D.C. keeping him out of LA as he hopes to get confirmed for an ambassadorial posting to India.

The top execs at AECOM will have to settle for some Texas-sized distance between themselves and the recent disclosure that one of their own executive vice presidents—Kelli Bernard, who was recruited from Garcetti’s office—was part of a snarky Facebook group run by the mayor’s chief of staff. The strange circle included now-suspended Ana Guerrero railing against labor legend Delores Huerta, among other juvenile gibes.

The rantings occurred before Bernard joined AECOM, and the company hasn’t responded to questions on whether the disclosure of her participation is a matter of concern.

No response from Bernard, either.

It was back in April when Wylie Aitken, the much-accomplished OC trial lawyer who also is a pillar of the Democratic Party and a long-serving trustee of Chapman University, took the opportunity of his appearance on a Live@5 YouTube edition of this column to talk about the school’s continuous efforts toward making its campus and culture more diverse and inclusive.

A lot of people talk about the same things, but Aitken’s comments got some impressive substantiation recently, when the College and University Professional Association Human Resources honored Chapman President Daniele Struppa with its 2021 HR Champion Award.

The Knoxville, Tennessee-based group cited much to Struppa’s credit, with this particular emphasis bearing out Aitken’s claims and indicating that Chapman’s focus has been more than a reaction to events of the past couple of years:

“In 2017, he commissioned a diversity panel of faculty and staff to devise a strategic plan for diversity, equity and inclusion,” the group noted. “He directed both faculty and staff hiring centers to amplify diversity hiring and promotion to create the most inclusive and reflective community the university has seen to date.”

It’s just as notable that such efforts were based on Struppa’s “commitments to build out and transform HR, recognizing HR as an organizational driver as opposed to a cost center.”

This might sound counter-intuitive, given Struppa’s academic background in the seemingly straightforward, cold-eyed world of mathematics.

Or perhaps it takes a real mathematician to do the math on human relations.

Anyone else notice a decided uptick in appearances on Bloomberg TV by representatives of Century City-based investment house Kayne Anderson Rudnick? And yes, the “Anderson” is for the late John Anderson, whose name graces UCLA’s business school. 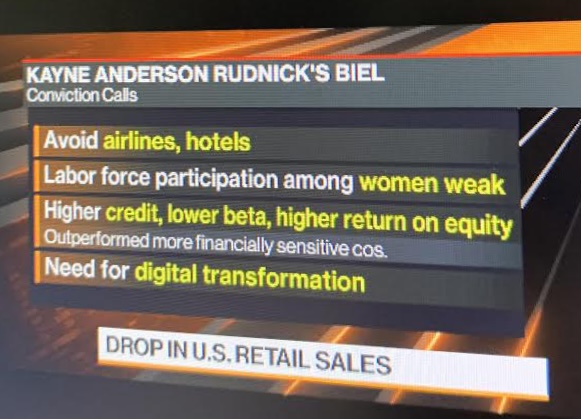 Good to see the understated powerhouse of an equity specialist get such attention from a high-profile powerhouse of the financial media.

You can’t do better than the brisket sandwich at Factor’s Famous Deli on Pico Boulevard.